Why Were Chainsaws Invented?

What was the chainsaw originally invented for?

It would interest you to know that the chainsaw which is currently a wood worker’s most handy tool was first used on women.

Surprised? Well, that’s the truth about chainsaws. They were used to deliver babies. Childbirth complications necessitated its creation. Though, the initial design of the chainsaw was way different from what we have today. It was smaller with sharp teeth.

When the baby is stuck and unable to find its way out, doctors use this tool in cutting women open. The process is likened to what we know as cesarean sections today. However, it was no doubt a really messy process that led to post-childbirth complications in some women.

Why Were Chainsaws Invented for Childbirth?

Before the advancement in both science and medicine, the common way in which children were delivered was via the opening of the uterus.

However, not all babies could be born this way. Some babies during delivery were stuck either by their heads or their shoulders, making the whole process difficult.

To save the baby’s life and that of the mother, doctors invented a tool, the chainsaw. It was small in size with sharp edges. This chainsaw was used to slit the cartilage of the mother’s pubic symphysis.

It widened the diameter of the pelvis so it became easier for the body to be pushed out. Although, the change caused to the anatomy of the mother was permanent. Many women could not walk for days, weeks, and in some cases months after the process.

The horrifying aspect is the fact that no anesthesia was administered before the commencement of the procedure.

Controversy Around The Use of Chainsaws For Childbirth

It has been established in most medical records that the process of using the chainsaw to aid delivery was the major alternative at that time. The process is known as symphysiotomy or pelviotomy or synchondrotomy.

The practice was more common in Ireland and Argentina in the 18th century. There are records that this method was used on women in several other parts of the world.

It is believed that the procedure was actually helpful in reducing the risk of mother-child death.

On the flip side, there were several cases in which women felt this procedure violated their rights as women. Some women lost their babies a few moments after delivery as either the baby’s head was injured or a severe injury was inflicted on them.

In some cases, the mother developed complications after the process. Complaints about the looseness of the pelvis, difficulty walking, fistula, and a host of others were reported as complications that occurred due to symphysiotomy.

Many women in Ireland described the process as plain butchering. Several lawsuits were filed against doctors, hospitals, and the government. The women complained about how the doctors felt they could try out such a procedure without first seeking their consent.

At a time in Ireland where the dominant catholic belief was against the use of contraceptives, many women got multiple pregnancies within a short time frame and were subjected to this ordeal.

In seeking justice, the women formed a group known as SoS – survivors of symphysiotomy. They all campaigned for compensation and an apology from the government and hospitals for violating their human rights. After a while, the government sought to give the victims monetary compensation. Many were still displeased after that.

The advent of cesarean sections marked a close to this practice. As medicine advanced, more women opted for CS for fear of complications. The cesarean section which involves making a small cut in the lower abdomen and uterus seemed to be a more patient-friendly approach.

Who Invented The First Chainsaw and When?

The first chainsaw was created by two doctors, James Jeffray and John Aitken in the late 18th century. After its creation, it became an invaluable tool in childbirth procedures and the removal of diseased bones.

The inventors are of Scottish origin. They both made relevant contributions to the field of medicine.

James Jeffray is said to be the one who came up with the idea and design of the tool. He was able to create the tool several years after conceiving the idea.

How Was The Chainsaw Used In Childbirth?

When babies found it difficult to come out through their mother’s birth canal, doctors had to come up with a way to bring the baby out.

The first procedure doctors thought of was using a knife to cut the mother’s pelvis. This procedure was slow, time-consuming, and extremely painful. It sometimes resulted in injuries for both mother and child.

Following that, John Aitken and James Jeffray invented the first chainsaw which received widespread acceptance. Unlike the knife, it was faster and easier to cut the cartilage of the pelvis.

The procedure still met a bit of resistance especially in the era before the creation of anesthesia. Currently, the procedure is only done after anesthesia has been given to the mother. This reduces the pain that comes with cutting.

Evolution Of The Chainsaw

The aging of the world was followed by the evolution of chainsaws. Its design in medicine helped some creative-minded individuals come up with ideas that could be useful in the woodworking industry.

In 1926, Andreas Stihl, a German Engineer created the first-ever electric chainsaw. It was a huge device that consumed lots of energy but little mechanical force. He is known as the ‘Father of modern chainsaw’.

The following year,  Dolmar, an institution owned by Emil Lerp, improved on the existing design creating the first petrol chainsaw. Unlike Stihl’s design, it only needed petrol and could function in the absence of electricity. This provided some level of flexibility for woodworkers of that time.

About 23 years later, the first portable one-man chainsaw was created. It became possible following the contributions of Claude Poulan and McCulloch. Poulan realized the tool needed amendment while he was watching over some prisoners in Germany. Simultaneously, McCulloch was producing handy mechanical tools for the same purpose.

The anti-vibration system chainsaw design was created in 1964. It aimed at reducing the mechanical force required to operate the device.

The chain brake style came to life in 1972, followed by the Quick stop and Catalyser design in 1982 and 1989 respectively.

Even today, tech companies are still trying to improve on the design to create something more portable, effective, and efficient.

The Extinction Of Medical Chainsaws

The theory of use and disuse in science is applicable in every aspect of life. Medical chainsaws were of great importance for over two centuries.

New inventions came and proved to be more effective. The cesarean section was performed alongside chainsaw procedures for years. At some point, they were both on a par when it came to effectiveness.

Lots of work was done on how to improve the cesarean section procedure and make childbirth less painful. Over time, the death rate associated with the procedure declined.

The controversies around the chainsaw procedure contributed to its silencing. Many women felt like they were abused due to how it was carried out. Although, it remains a legal and effective procedure that can be swift and effective in combination with the use of vacuum and anesthesia.

At some point in the 20th century, mothers who experienced childbirth complications preferred opting for cesarean sections. As it recorded lots of success, it was able to reduce the frequency of the former procedure.

Now, it’s quite rare to find a medical chainsaw or a hospital that still carries out the practice. Thanks to the changes that took place over a continuum of time, women can now have their babies via less painful procedures. Although, there are reports about complications due to CS births. The underlying factor remains the ease in managing complications with this practice.

The common chainsaws today are reserved for wood and woodworking.

When did chainsaws stop being used for childbirth?

The practice of using chainsaws for delivery started to decline in the 20th century when the alternative cesarean section procedure became more effective.

Was the chainsaw really invented for childbirth?

It might sound weird and hard to believe but the chainsaw was meant to be a medical tool to help babies stuck in the mother’s birth canal find their way out. It was created years after James Jeffray conceived the idea. He created the tool with John Aitken.

How did chainsaws help deliver babies?

The chainsaw was used to swiftly slit the cartilage of a woman’s pubic symphysis to bring out her baby.

Chainsaws have an amazing history. In each stage of its creation and advancement, it has served as a very effective tool, both in medicine and woodworking.

Why did the chainsaw become a meme?

The room is badly lit. A meme has gone viral depicting people’s reactions when they learn why chainsaws were made, and a video on TikTok claims chainsaws were first invented to aid in childbirth. So, if you’ve come here because you want to know the answer, you’re about to learn it. 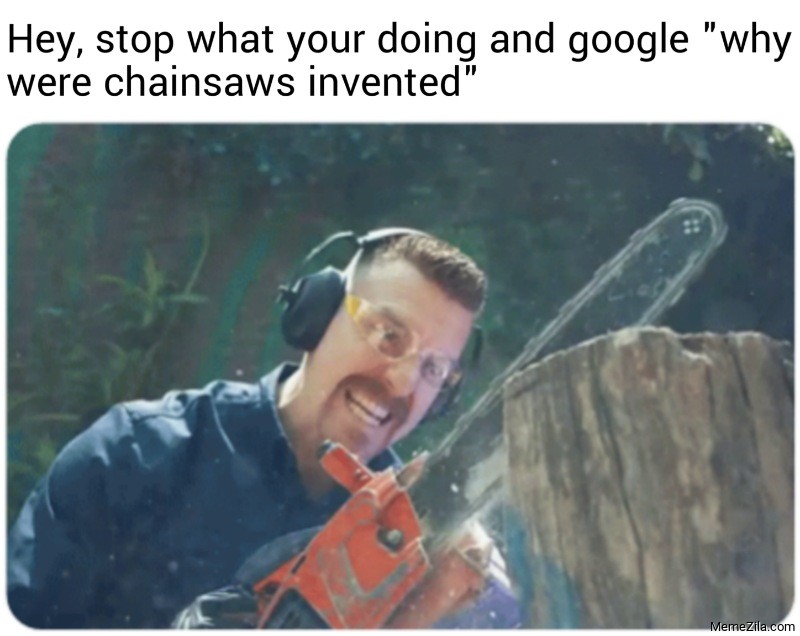 When did they stop using chainsaws for childbirth?

It was used as part of a surgical toolkit throughout much of the 19th century until C-sections became more popular. The principle was repurposed in the 20th century for less obtrusive applications such as logging, with two-person saws weighing more than 100 pounds each. By the 1950s, lighter variants had taken their place.

ThriveVergehttps://thriveverge.com
The founder and CEO at ThriveVerge, The Verge, and Thrive Revolution. He launched Thriveverge in 2016, a leading behavior change technology, business, media, and entertainment company with the mission of ending the collective delusion that burning out is the price we have to pay for success.
RELATED ARTICLES
Opinion

What To Look For When Hiring an Immigration Lawyer? Here’s the Explanation